Homily of Archbishop Charles Brown, Apostolic Nuncio to Ireland, at Mass in thanksgiving for the Eucharistic Congress and to introduce the Year of Faith

Your Eminence, Your Excellencies, my fellow priests, dear men and women religious, beloved brothers and sisters in Christ Jesus. 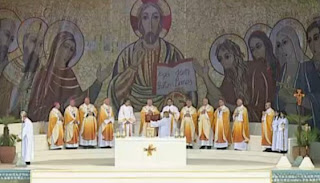 We come together in this beautiful College chapel this evening at an important moment in the life of the Church in .  For all of us here tonight as well, autumn brings a new beginning, the summer vacations are over, a new academic year begins, and we – whatever our specific vocation in the Church – return to our work for the Church.  We have only recently concluded the immensely encouraging International Eucharistic Congress in Dublin, which was such an occasion of grace for the Church in Ireland and, on behalf of the Holy Father, I want to say a very sincere ‘thank you’ to all those who worked so hard to make it the success that it was.  In approximately two weeks’ time we will begin the Year of Faith, called by the Holy Father to coincide with the fiftieth anniversary of the opening of the Second Vatican Council.

As we move forward, it seems to me that these two events, the International Eucharistic Congress and the Year of Faith, provide the perfect context for us, because both of these events call us to focus and to centre ourselves on what is truly most important.  One of the perennial occupational hazards for all of us who, in different ways, work and minister in the Church is to become so absorbed in the details and commitments of our work as to forget the reason and primary motivation for everything we do.  Whatever our ministry, there is the danger that our attention to doing our job – be it representing the Holy See or administering a Diocese or working in a department of the Episcopal Conference – can become so all-encompassing in itself that we literally begin to forget the reason why our job is indeed important.  Our Gospel for today’s Mass is a striking reminder what is important, a reminder of what counts in the ultimate analysis.

Jesus questions his disciples about who people say that he is, and the disciples relate to him what they have heard the people say.  But the Lord only asks the question in order that the disciples themselves might reflect on who he is, and so he then asks them directly: “But who do you say that I am?”  Peter speaks on behalf of all: “You are the Christ”.  Peter’s response goes beyond relating what other people have said about Jesus; instead he gives voice to what he himself believes about the son of the carpenter from .  Peter expresses his faith in the Lord as the Christ, as God’s anointed one.

For the rest of this  Homily go to:  Catholic Bishops Ireland - Homily of Archbishop Brown continued..