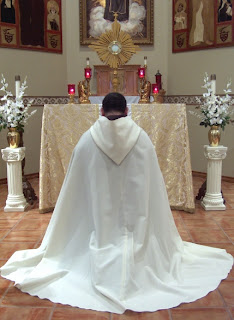 The National Apostolate of Adoration has reacted with delight to the announcement that Pope Francis will next Sunday, , take part in a period of Eucharistic Adoration, which will be televised live throughout the world at .

The Pope has invited every parish in the world to have a time of Eucharistic Devotion on the same day, Feast of the Solemnity of the Body and Blood of Christ.

John Howard from the National Apostolate of Perpetual Eucharistic Adoration said that from the time of Pope John Paul II, there has been great support from popes for Eucharistic Adoration.  “Scarcely a month went by when the pope did not mention the power of prayer before the Blessed Eucharist,” he told told Catholic Ireland,  but said Mr Howard, this initiative of inviting the faithful to pray before the Eucharist with the pope was a “thrilling” development.

According to the National Co-Ordinator in and , Eucharistic Adoration is on the rise all the time. “A few years ago there were a few hundred centres of adoration in . Today there are more than 2,000,” said Mr Howard.

The adoration is happening in parish churches, convents and monasteries.

In 2000 there were only two diocesan Adoration Committees, but with the support of the bishops, today nineteen of the twenty -six diocese have their own committees. Parishes are invited to set up a “viable weekly adoration programme”.   “This means there should be three to four people doing adoration each hour,” Mr Howard explains.

Such has been the effect and success of the movement in , that members of the National Apostolate of Adoration were invited to the diocese of Arundel and last year to set up a diocesan Adoration Committee there, and this is now being replicated in other English dioceses.

Above from and continued here:  Catholic Ireland News