‘If we are called before courts, that is our opportunity to give witness’ Bishop Mark Davies tells Luke Coppen that Catholics in Britain face a time of great testing

Interview with the Bishop of Shrewsbury, England, Mark Davies
from the Catholic Herald Newspaper (Luke Coppen) 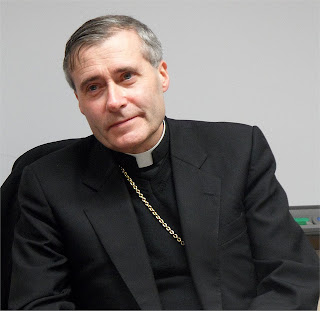 That’s a question I’ve pondered, on and off, ever since he was appointed Bishop of Shrewsbury in October 2010, shortly after the papal visit. Going solely by the headlines he often generates, I expected him to be fiery. But those who had met him described him as a gentle and quiet, yet decisive figure.

So it was intriguing to meet him for the first time when he visited our offices in October. During the interview, which took place in our atmospheric meeting room, he struck me as someone who takes life and the responsibilities of office with a deadly seriousness, but nevertheless exudes warmth and kindness. When he described what he sees as the coming persecution of the Church I felt slightly shaken because he seemed to picture it so vividly and be prepared to face the consequences.