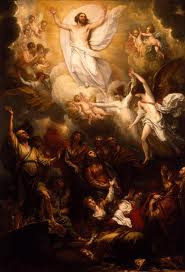 Benedict XVI: The Invisible Presence of Jesus Working through the Power of His Spirit

The Evangelist Luke says that after the Ascension the disciples returned to “with great joy” (24: 52).
Their joy stems from the fact that what had happened was not really a separation, the Lord’s permanent absence.

On the contrary, they were then certain that the Crucified-Risen One was alive and that in him God’s gates, the gates of eternal life, had been opened to humanity for ever.

In other words, his Ascension did not imply a temporary absence from the world but rather inaugurated the new, definitive and insuppressible form of his presence by virtue of his participation in the royal power of God.

It was to be up to them, the disciples emboldened by the power of the Holy Spirit, to make his presence visible by their witness, preaching and missionary zeal.

The Solemnity of the Lord’s Ascension must also fill us with serenity and enthusiasm, just as it did the Apostles who set out again from the “with great joy”.
Like them, we too, accepting the invitation of the “two men in dazzling apparel”, must not stay gazing up at the sky, but, under the guidance of the Holy Spirit must go everywhere and proclaim the saving message of Christ’s death and Resurrection.

His very words, with which the Gospel according to St Matthew ends, accompany and comfort us: “and lo, I am with you always, to the close of the age” (Mt 28: 19).

Dear brothers and sisters, the historical character of the mystery of Christ’s Resurrection and Ascension helps us to recognize and understand the transcendent condition of the Church which was not born and does not live to compensate for the absence of her Lord who has “disappeared” but on the contrary finds the reason for her existence and mission in the invisible presence of Jesus, a presence working through the power of his Spirit.

In other words, we might say that the Church does not carry out the role of preparing for the return of an “absent” Jesus, but, on the contrary, lives and works to proclaim his “glorious presence” in a historical and existential way.

Since the day of the Ascension, every Christian community has advanced on its earthly pilgrimage toward the fulfilment of the messianic promises, fed by the word of God and nourished by the Body and Blood of her Lord.

This is the condition of the Church, the Second Vatican Council recalls, as she “presses forward amid the persecutions of the world and the consolations of God’, announcing the Cross and death of the Lord until he comes” (Lumen Gentium, n. 8).