Ordinations to the Priesthood and Diaconate 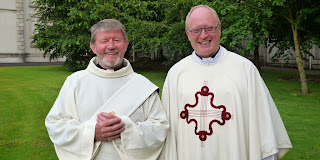 Fr Terence McGovern, a native of Carlow, was ordained to the priesthood on Sunday June 23rd by Bishop James Moriarty in the Cathedral of the Assumption. Deacon Sean Hyland from Kildare & Leighlin diocese and Deacon Barry Larkin from Ferns diocese assisted in the cermony which was also attended by a large number of priests and their Bishop Elect Fr Denis Nulty.   Fr. Terence had worked for 15 years as a solicitor, initially at Lanigan, Malcomson & Law and then on his own at an office in Carlow.  Having found himself drawn to the priesthood Terence spent a year in  while waiting to commence his studies in the  in  in 2009.  The  forms older men, often convert clergymen, for Catholic priesthood. Their period of study is four years  because they are seen to have significant knowledge and experience already. Above Fr. Terence with Deacon Sean Hyland.

Sean Hyland was ordained a deacon for the Diocese of Kildare and Leighlin on 14th June.

Rev Jonathan Flood a native of Ballintra will be ordained to the Priesthood by Bishop Philip Boyce, OCD, Bishop of Raphoe on Sunday 30th June in the Cathedral of Sts Eunan and Columba, Letterkenny at .
The Archdiocese of Armagh looks forward to the Priestly ordination of Rev Paul Murphy also on Sunday 30th June at at the , Termonfeckin.  Rev Paul Murphy studied Philosophy in St Malachy’s College, before moving to The Irish College, for this Theology studies.  Rev Paul Murphy has been ministering as a Deacon in the parish of for the last year while studying Liturgy in St Patrick’s College, Maynooth.

Email ThisBlogThis!Share to TwitterShare to FacebookShare to Pinterest
Labels: Archdiocese of Armagh, Diaconate, Diocese of Kildare & Leighlin, Diocese of Raphoe, Ordination to Priesthood