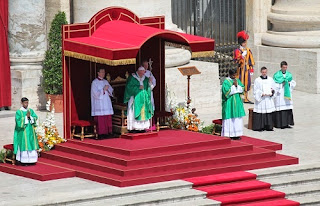 Vatican City, Jun 16, 2013 / 06:25 am (CNA/EWTN News).- As he met with thousands of pro-life advocates from around the globe, Pope Francis stressed that the Gospel is the “way to freedom and life,” but lifestyles that are “dictated by selfishness” lead to slavery and death.

“Dear brothers and sisters,” the Pope urged, “let us look to God as the God of Life, let us look to his law, to the Gospel message, as the way to freedom and life. The Living God sets us free!”

He addressed his homily for the June 16 Mass in St. Peter’s Square to pilgrims from Australia, Asia, Europe and North and South America, who filled the famous piazza up to its gates.

They were also joined in the square by around 1,400 people on their Harley-Davidson motorcycles, who came to Rome to celebrate 110 years of the iconic American machine and to receive the Pope’s blessing during the Angelus prayer that followed the Mass.

Pope Francis based his homily on the first reading from 2 Samuel, which recounts King David committing adultery with Bathsheba and conspiring to have her husband killed, and the Gospel reading from Luke 4, where Jesus forgives the adulterous woman of her sins.

He finished his homily by invoking the intercession of “Mary, Mother of Life,” asking her “to help us receive and bear constant witness to the ‘Gospel of Life.’”