The National Shrine to St. Anne 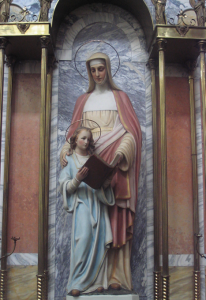 The brought devotion to St. Anne to and established a shrine in her honour in a chapel dedicated to their sainted Bishop of Rouen, St. Audoen, at Cornmarket in .  Devotion to St. Anne on this site dates from 1169/1170 centred on the  gifted relic (a finger bone) of St. Anne to their new home. Such was the level of devotion that by 1352 the festival of St. Anne on 26th July was declared a holy day of obligation and in 1431, King Henry VI granted letters patent establishing the Guild of St. Anne – “to the praise of God and of the Blessed Virgin Mary and in honour of St. Anne”. Six priests were necessary to tend to the needs of pilgrims from within , from and from the Continent. The Church contained a chapel to St. Mary (the Lady Chapel) and Anne, with altars to St. Catherine, St. Nicholas, and St. Clare. Excavation yields in 1967 to 1972 at the thirteenth century layer, included a pewter pilgrim-badge and a small bronze pilgrim’s flask/ampulla.   The Seal of the Guild can be seen today in the medieval church.

St. Audoens Catholic Church is situated in High Street, Dublin 8 and is currently under the care of the Polish Chaplaincy for Ireland and the administrator is Fr. Jaroslaw Maszkiewicz.