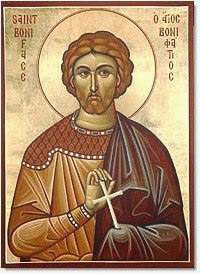 Today the Church remembers St. Boniface, bishop and martyr. He was born around 680 AD into a Saxon family and performed missionary in from 719 AD, when Pope Gregory II requested thusly, until the saint's death in c. 755 AD. Baptized with the name Winfrid, the saint received his early education in a Benedictine monastery in . In his teen years, he was sent to a monastery at Nursling in Hampshire,
where compiled the first ever dictionary of Latin grammar. At the age of 30, St. Boniface was ordained a priest.

In 716 AD he began missionary work in the area of present-day . Declining the offer to become Abbot of Nursling, St. Boniface went to in 719 and was commissioned by Pope Gregory II to be a missionary to . At that point, he was given the name "Boniface" meaning "meaning maker of good". In his missionary work, St. Boniface was assisted by Saint Albinus, Saint Abel, and Saint Agatha. During his mission in , St. Boniface destroyed idols and pagan temples, and built churches on the sites to erase the false worship and establish worship of the True God. In 722, St. Boniface was consecrated a bishop.

Much of had very little knowledge of true Christianity. St. Boniface became bishop of and did amazing things for the Church in by helping to spread the Faith.  Boniface was called upon to lend his own support to which was also sadly in need of reform. He set up councils and syonds and instituted reforms which revitalized the Church there.

At 73, a time when most are thinking of rest and relaxation, Boniface headed back to on a new mission. One day in 754 while he was awaiting some confirmands, an enemy band attacked his camp. Although his companions wanted to fight, Boniface told them to trust in God and to welcome death for the faith. All of them were martyred. Boniface is known as the Apostle of Germany

Almighty God, the martyr Saint Boniface
sealed with his blood the faith he preached.
Let him pray
that we may hold fast to the faith
and profess it courageously in our lives.
Through our Lord Jesus Christ, your Son,
who lives and reigns with you and the Holy Spirit,
one God, for ever and ever.  Amen