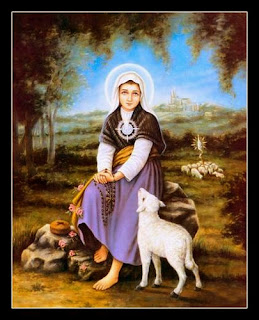 June 15 is the feast day of St. Germaine Cousin, a simple and pious young girl who lived in in the late 1500s. Germaine was born in 1579 to poor parents. Her father was a farmer, and her mother died when she was still an infant. She was born with a deformed right arm and hand, as well as the disease of scrofula, a tubercular condition.

Her father remarried soon after the death of her mother, but his new wife was filled with disgust by Germaine's condition. She tormented and neglected Germaine, and taught her siblings to do so as well.

Starving and sick, Germaine was eventually kicked out of the house and forced to sleep under the stairway in the barn, on a pile of leaves and twigs, because of her stepmother’s dislike of her and disgust of her condition. She tended to the family's flock of sheep everyday.

Despite her hardships, she lived each day full of thanksgiving and joy, and spent much of her time praying the Rosary and teaching the village children about the love of God. She was barely fed and had an emaciated figure, yet despite this she shared the little bread that she had with the poor of the village.

From her simple faith grew a deep holiness and profound trust in God. She went to Mass everyday, leaving her sheep in the care of her guardian angel, who never failed her. Germaine’s deep piety was looked upon with ridicule by the villagers, but not by the children, who were drawn to her holiness.

God protected Germaine and showered his favor upon her. It was reported that on days when the river was high, the waters would part so that she could pass through them on her way to Mass. One day in winter, when she was being chased by her stepmother who accused her of stealing bread, she opened her apron and fresh summer flowers fell out. She offered the flowers to her stepmother as a sign of forgiveness.
Eventually, the adults of the village began to realize the special holiness of this poor, crippled shepherdess. Germaine's parents eventually offered her a place back in their house, but she chose to remain in her humble place outside.

Just as the villagers were realizing the beauty of her life, God called her to Himself. Her father found her body on her bed of leaves one morning in her 22nd year of life.

Forty-three years later, when a relative of hers was being buried, Germaine’s casket was opened and her body was found incorrupt. People in the surrounding area began praying for her intercession and obtaining miraculous cures for illnesses.

St. Germaine was canonized by Pope Pius IX in 1867 and inscribed into the canon of virgins.

St. Germaine pray for us and help us to have respect for all human life and especially those who are the most vulnerable.