Cardinal Piacenza to seminarians:”You will probably be the first generation that will correctly interpret the Second Vatican Council” 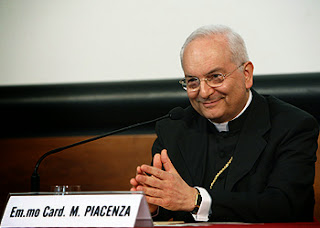 You will probably be the first generation that will correctly interpret the Second Vatican Council, not according to the “spirit” of the Council, which has brought so much disorientation to the Church, but according to what the conciliar event really said in its texts to the Church and to the world.

A Vatican II different from that which produced the texts we have in our possession today does not exist! It is in those texts that we find the will of God for his Church and is against these that it must be measured, in company with two thousand years of Tradition and Christian life.

Renewal is always necessary for the Church, because the conversion of her members, poor sinners, is always necessary!  But there cannot be, nor could there be, a pre-Conciliar Church and a post-Conciliar Church! If this could be so, the second one – ours – would be historically and theologically illegitimate!
There is one Church of Christ, of which you are part, which goes from forth Our Lord to the Apostles, from the Blessed Virgin Mary to the Fathers and the Doctors of the Church, from the Middle Ages to the Renaissance, from Romanesque to Gothic to Baroque, and thus until our days, uninterruptedly, without any interruption of continuity, ever!

And all that because the Church is the Body of Christ, it is the unity of His Person that is given to us, her members!