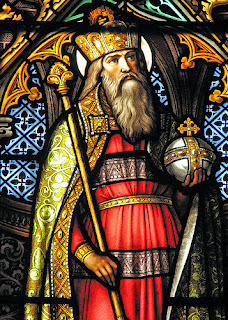 St. Henry, son of Henry, Duke of Bavaria, and of Gisella, daughter of Conrad, King of Burgundy, was born in 972. He received an excellent education under the care of St. Wolfgang, Bishop of Ratisbon. In 995, St. Henry succeeded his father as Duke of Bavaria, and in 1002, upon the death of his cousin, Otho III, he was elected emperor. Firmly anchored upon the great eternal truths, which the practice of meditation kept alive in his heart, he was not elated by this dignity and sought in all things, the greater glory of God. He was most watchful over the welfare of the Church and exerted his zeal for the maintenance of ecclesiastical discipline through the instrumentality of the Bishops.

He gained several victories over his enemies, both at home and abroad, but he used these with great moderation and clemency. In 1014, he went to  and received the imperial crown at the hands of Pope Benedict VIII. On that occasion he confirmed the donation, made by his predecessors to the Pope, of the sovereignty of  and the exarchate of . Circumstances several times drove the holy Emperor into war, from which he always came forth victorious. He led an army to the south of  against the Saracens and their allies, the Greeks, and drove them from the country.

The humility and spirit of justice of the Saint were equal to his zeal for religion. He cast himself at the feet of Herebert, Bishop of Cologne, and begged his pardon for having treated him with coldness, on account of a misunderstanding. He wished to abdicate and retire into a monastery, but yielded to the advice of the Abbot of Verdun, and retained his dignity. Both he and his wife, St. Cunegundes, lived in perpetual chastity, to which they had bound themselves by vow. The Saint made numerous pious foundations, gave liberally to pious institutions and built the Cathedral of Bamberg. His holy death occurred at the , near Halberstad, in 1024. His feast day is July 13th.

He is the patron saint of the childless, of Dukes, of the handicapped and those rejected by Religious Orders.

St. Henry help us to protect life and the lives of the vulnerable and
help us to build a culture of life in our world today.