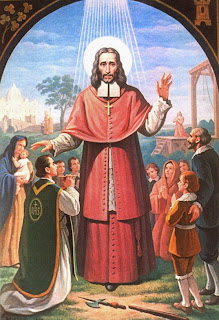 Saint Oliver Plunkett
( - ) was the Roman Catholic Archbishop of  and Primate of All Ireland. He maintained his duties in  in the face of English persecution and was eventually arrested and tried for treason in . He was hanged, drawn and quartered at Tyburn on , and became the last Roman Catholic martyr to die in . Oliver Plunkett was beatified in 1920 and canonised in 1975, the first new Irish saint for almost seven hundred years.

Go to website for more information on this wonderful Irish Saint and Martyr:
Saint Oliver Plunkett

St. Oliver Plunkett pray for all our Bishops in Ireland that they may have the courage to speak up for the Truth of the Gospel of Jesus Christ.