Twenty new seminarians to commence Priesthood studies and What are we doing to encourage more Vocations at a Parish Level ? 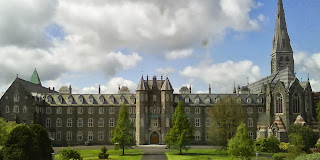 “ … have the courage to go against the tide of the culture of pragmatism and efficiency.”  Pope Francis


Today, Saint Patrick’s College Maynooth welcomed twenty new seminarians, who will commence their formation for the priesthood at the National Seminary.  At the conclusion of the Introductory Programme at the end of September, three of the new seminarians from Northern dioceses will continue their studies at Saint Malachy’s Seminary in .

Welcoming the new candidates, their families and friends to Maynooth, the President of the College, Monsignor Hugh Connolly, recalled the recent words of Pope Francis in Rio de Janeiro for World Youth Day in July:  “Dear seminarians who are preparing for ministry: have the courage to go against the tide of the culture of pragmatism and efficiency. Be courageous! Be servants of communion and of the culture of encounter.”

Above from and continued here: Catholic Bishops Conference - 20 New Seminarians to Commence Priesthood Studies in Maynooth

We do have to ask ourselves what are we doing for Vocations in our local Parishes ? Eucharistic Adoration, Prayer and Apostolate Groups, Catechesis Groups, reaching out through Social Media etc etc.

For good media outlets on vocations: