Catholic Bishops of the Philippines urges Revival of Prayer to St. Michael the Archangel after Holy Mass 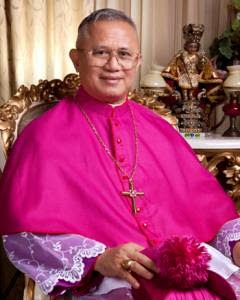 , — The Catholic Bishops’ Conference of the has authorized for use of the old St. Michael the Archangel Prayer for recitation after Mass in all churches nationwide.
In a circular to all the archdioceses and dioceses, the CBCP highly recommends the recitation of the prayer composed by Leo XIII in 1896 amid the “many situation of trouble and conflict” in the country.
Archbishop Jose Palma, CBCP president, said the prayer is also “very timely” because of recent calamities that brought havoc in various areas and the “escalating” corruption in the government.


“Through this prayer, we invoke St. Michael to defend us and our country against the wickedness and snares of the evil one,” said.
“Michael – which means, “Who is like God” – will win over all the evil attempts to disfigure the face of mankind because God Who is stronger acts in him,” he added.

The Prayer to St. Michael the :
“St. Michael the , defend us in battle, be our defense against the wickedness and snares of the devil; may God rebuke him we humbly pray. And do thou, O Prince of the Heavenly hosts, by the power of God, cast into hell Satan and all the other evil spirits who prowl upon the earth for the ruin of souls. Amen”. (CBCPNews)

Above from:  Conference of Catholic Bishops Philippines

*We certainly need to do this in Ireland also...