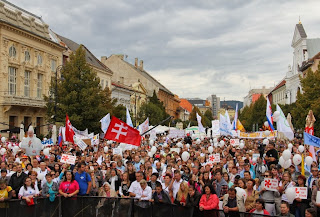 (LifeSiteNews.com) - Over 80,000 people gathered in the Slovakian town of yesterday for the country’s first ever March for Life, a number that has astonished even the event’s organisers. “Such a number of people no one expected,” one eyewitness told local news services.

So many came that the 2.5 kilometer route was too short to accommodate all the marchers, according to an on-the-spot account by Hlavné Správy, a local news service, and the crowd shut down most streets in the city’s core. Although the March was supposed to have started by , by most of the crowd “had not yet budged because of the huge mass of people who completely fill the street”.

The March for Life was held on the same weekend as the Gay Pride demonstration in the capital, , which reportedly attracted about 1000 participants.

Organizers of the March for Life said their aim was to mobilize the public to advise legislators that the "protection of life, and family consisting of a married man and woman as indispensable basis for the stability and development of life in has public support."

While Slovakian pro-lifers have held pro-life demonstrations before, this event, organized by the Conference of Slovak Bishops (KBS) with the help of Fórum života (Forum for Life), was the first event organized on a national scale.

Above from and Continued here:  LifeSite News - First ever March for Life in Slovakia draws 80,000

And more on the March for Life in Slovakia here:  Aleteia.Org - Slovakia Stuns Europe With Colossal March For Life


*My own comment - It is wonderful what can happen when the Bishops take the lead which they did here with the help of other Pro Life groups.  They are not afraid to preach the Gospel in the face of a hostile media who ignores all those who are fighting for the truth, for family and for life.