Miracle of Divine Mercy - He was brain dead until they Prayed.... 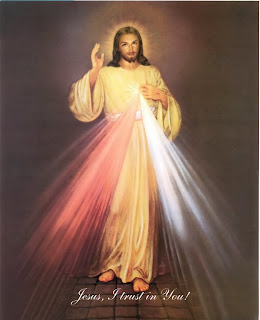 Tens of thousands of pilgrims visit the National Shrine of The Divine Mercy in Stockbridge, Mass., each year. This is the latest in a series in which they ask Shrine visitors what brings them here.

From Jim and Rose Shiflett:

"I never knew who St. Faustina was," Jim Shiflett said. He knew the stories of a number of the saints — just not the history of the patron of his parish in "For some strange reason, I said, 'I'm gonna learn about St. Faustina. I want to know who she is.' For two weeks in Lent last year, I sat down and I read all about St. Faustina."

And then on Monday in Holy Week, Jim and his wife Rose got the phone call every parent dreads. They were told that Brian, their middle son, was in intensive care at the .

When he'd fallen at work on a pallet, he'd brushed it off, paid it no mind. But Brian got a contusion on his lung — his only lung. The contusion worsened over the next few days until there he was at 3 in the morning, unable to breathe. Then came the heart attack. "My daughter-in-law and her neighbor were giving him CPR, trying to bring him back," said Jim, but Brian had endured 12 minutes without oxygen to the brain by the time the paramedics arrived. "He was there for 17 days in intensive care."

Above from and full story of Miracle that occurred is continued here:  Divine Mercy - Marians of Immaculate Conception USA

*It is important that we recognise the importance of the Divine Mercy for our times.  It is not just a devotion, it is also a way of life in which we bring Gods Mercy to others.  In these days we need to encourage others who are weighed down by sin to go to Confession, for the release of sins and for healing.  There are many Divine Mercy Groups throughout Ireland and the world, who pray for Divine Mercy for their Parishes, for families, for those weighed down with addictions of all kinds, for those who are caught up in sin, for those who have left the Church, for unity, for Peace, for consolation for the Holy Souls and for the sick and dying.

"Say unceasingly the Chaplet that I have taught you. Whoever will recite it, they will receive great mercy at the hour of death. Priests will recommend it to sinners as their last hope of salvation. Even if there were a sinner most hardened, if he were to recite this chaplet only once, he would receive grace from My infinite mercy" (diary, 687).