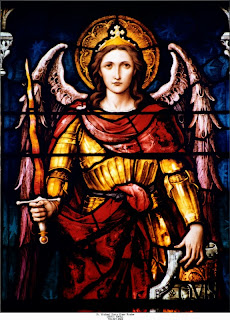 St. Michael the Archangel, defend us in the hour of conflict
Be our safeguard against the wickedness and snares of the devil
May God rebuke him we humbly pray and do thou O Prince of the Heavenly Host
Thrust down into hell satan and with him all the evil spirits who prowl about the world for the ruin of souls.
Amen

All this becomes even clearer if we now look at the figures of the three Archangels whose Feast the Church is celebrating today. First of all there is Michael. We find him in Sacred Scripture above all in the Book of Daniel, in the Letter of the Apostle St Jude Thaddeus and in the Book of Revelation.

Two of this 's roles become obvious in these texts. He defends the cause of God's oneness against the presumption of the dragon, the "ancient serpent", as John calls it. The serpent's continuous effort is to make men believe that God must disappear so that they themselves may become important; that God impedes our freedom and, therefore, that we must rid ourselves of him.

However, the dragon does not only accuse God. The Book of Revelation also calls it "the accuser of our brethren..., who accuses them day and night before our God" (). Those who cast God aside do not make man great but divest him of his dignity. Man then becomes a failed product of evolution. Those who accuse God also accuse man. Faith in God defends man in all his frailty and short-comings: God's brightness shines on every individual. It is the duty of the Bishop, as a man of God, to make room in the world for God, to counter the denials of him and thus to defend man's greatness. And what more could one say and think about man than the fact that God himself was made man?

Michael's other role, according to Scripture, is that of protector of the People of God (cf. Dn ; 12: 1). Dear friends, be true "guardian angels" of the Church which will be entrusted to you! Help the People of God whom you must lead in its pilgrimage to find the joy of faith and to learn to discern the spirits: to accept good and reject evil, to remain and increasingly to become, by virtue of the hope of faith, people who love in communion with God-Love.

Email ThisBlogThis!Share to TwitterShare to FacebookShare to Pinterest
Labels: St. Michael the Archangel, The Archangels