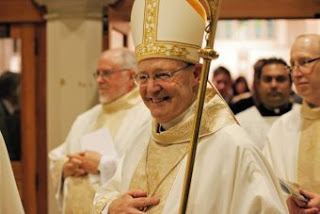 's new Catholic Archbishop has revealed he prefers men not women to take on the role of altar servers at mass.

Archbishop Julian Porteous was installed in a mass at 's St Marys Cathedral last night and the highlights of the ceremony were on YouTube several hours later.

The new Archbishop has declared his passion for social media, but also revealed some traditional views about how services should be run.

St Marys Cathedral has used middle-aged women as altar servers in the past, but The Most Reverend Porteous says he prefers children and men to take on the role, to encourage them into the priesthood.
"Altar servers, generally speaking, are primary school age, around that age, and so there's always been a tradition of having altar boys around that age and so girls can also be at that age," he said.

"When you move into high school I think it's more appropriate that we have men, young men who are serving on the altar."

Above from and video interview here: ABC. Net Australia News

*Good for him I say.  Let us pray for Archbishop Julian in his efforts to return the Liturgy of the Holy Mass to what it should be.  We have had enough of the watering down of the Holy Mass.  It is time to stop the rot and restore the reverence and respect for the True Presence of Jesus Christ in the Holy Eucharist.  It is the only way to restore holy vocations to the Priesthood.