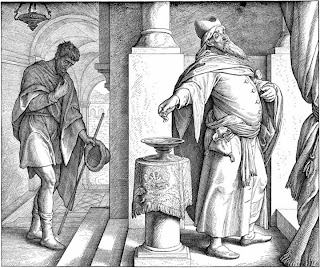 And what is to the Saints above a theme of never-ending thankfulness, is, while they are yet on earth, the matter of their perpetual humiliation. Whatever be their advance in the spiritual life, they never rise from their knees, they never cease to beat their breasts, as if sin could possibly be strange to them while they were in the flesh. Even our Lord Himself, the very Son of God in human nature, and infinitely separate from sin,—even His Immaculate Mother, encompassed by His grace from the first beginnings of her existence, and without any part of the original stain,—even they, as descended from Adam, were subjected at least to death, the direct, emphatic punishment of sin. And much more, even the most favoured of that glorious company, whom He has washed clean in His Blood; they never forget what they were by birth; they confess, one and all, that they are children of Adam, and of the same nature as their brethren, and compassed with infirmities {17} while in the flesh, whatever may be the grace given them and their own improvement of it.

Others may look up to them, but they ever look up to God; others may speak of their merits, but they only speak of their defects. The young and unspotted, the aged and most mature, he who has sinned least, he who has repented most, the fresh innocent brow, and the hoary head, they unite in this one litany, "O God, be merciful to me, a sinner." So it was with St. Aloysius; so, on the other hand, was it with St. Ignatius; so was it with St. Rose, the youngest of the saints, who, as a child, submitted her tender frame to the most amazing penances; so was it with St. Philip Neri, one of the most aged, who, when some one praised him, cried out, "Begone! I am a devil, and not a saint;" and when going to communicate, would protest before his Lord, that he "was good for nothing, but to do evil." Such utter self-prostration, I say, is the very badge and token of the servant of Christ;—and this indeed is conveyed in His own words, when He says, "I am not come to call the just, but sinners;" and it is solemnly recognized and inculcated by Him, in the words which follow the text, "Every one that exalteth himself, shall be humbled, and he that humbleth himself, shall be exalted."

Above taken from section of Sermon, which can be read in full here: Newman Reader - Sermon 2

*We are now in our 5th Day of Novena to Bl. John Henry Newman for the intention of an Irish Ordinariate.  Prayer to Bl. Newman on Sidebar.