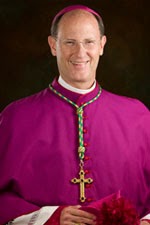 Bishop James D. Conley, STL, is the Catholic bishop of . And he writes;

By 1673, across , military and civil officials were required to swear by oath that bread and wine could not be turned into the Body and Blood of Jesus Christ.

The penalty for belief in the Eucharist was exile, prison, or death.

In 1673, Oliver Plunkett was the Archbishop of Armagh, the Primate of Ireland.

He would not swear an oath against his conscience. In fact, he went into hiding, supporting the Church, and promoting heroism among the Irish priesthood. Plunkett was falsely accused of treason, arrested, and in 1681, he was martyred. His crime was promoting the gospel of Jesus Christ.

Above from and continued here:  First Things - Mater Misericordiae Hospital