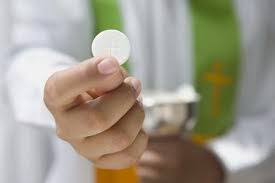 A Fine Gael Government TD has been told to stand aside as a minister of the eucharist by his Parish Priest, Fr. Peter O'Reilly in St. Marys, Lucan over his support for the controversial abortion legislation, the Sunday Independent has learnt.

The Sunday Independent has confirmed that Mr Keating was contacted last Saturday evening by Father Peter O'Reilly, parish priest in St Mary's in Lucan, who called on him not to fulfil his duties as a eucharistic minister given the controversy during the summer around the Protection of Life During Pregnancy Bill (abortion legislation).

In separate correspondence, Mr Keating was severely criticised by Fr Anthony Reilly, parish priest in St Philomena's Parish in Palmerstown, where he holds clinics for supporting the controversial legislation.

We pray for Fr. Peter and also for Mr. Keating in this instance. Fr. Peter was right in doing what he did as it is in keeping with what the Church says on this issue.

From the then Cardinal Ratzinger to the US Bishops.....

5. Regarding the grave sin of abortion or euthanasia, when a person’s formal cooperation becomes manifest (understood, in the case of a Catholic politician, as his consistently campaigning and voting for permissive abortion and euthanasia laws), his Pastor should meet with him, instructing him about the Church’s teaching, informing him that he is not to present himself for Holy Communion until he brings to an end the objective situation of sin, and warning him that he will otherwise be denied the Eucharist.

Post also on this by Fr. John Hogan here on his blog:  Ex Umbris et Imaginibus - A time to Choose