Their Angels in Heaven always look upon the face of my Heavenly Father - Bl. John Henry Newman 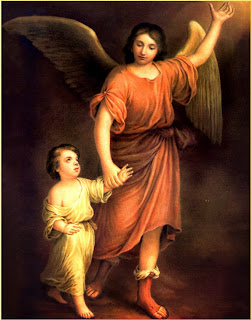 
Angels are actively employed among us in the Church. They are said to be "ministering spirits, sent forth to minister for them who shall be heirs of salvation" (Heb 1,14). No Christian is so humble but he has Angels to attend on him, if he lives by faith and love. Though they are so great, so glorious, so pure, so wonderful, that the very sight of them... would strike us to the earth, as it did the prophet Daniel, holy and righteous...; yet they are our "fellow-servants" and our fellow-workers, and they carefully watch over and defend even the humblest of us, if we be Christ's.

That they form a part of our unseen world, appears from the vision seen by the patriarch Jacob (Gn 28,10f.)... How little did he think that there was any thing very wonderful in this spot! It looked like any other spot. It was a lone, uncomfortable place.... Yet how different was the truth! Jacob saw but the world that is seen; he saw not the world that is not seen; yet the world that is not seen was there. It was there, though it did not at once make known its presence, but needed to be supernaturally displayed to him. He saw it in his sleep. "He dreamed, and behold, a ladder set up on the earth, and the top of it reached up to heaven; and behold, the Angels of God ascending and descending on it. And behold, the Lord stood above it."

This was the other world. Now, let this be observed. Persons commonly speak as if the other world did not exist now, but would after death. No: it exists now, though we see it not. It is among us and around us. Jacob was shown this in his dream. Angels were all about him, though he knew it not. And what Jacob saw in his sleep... the shepherds, at the time of the Nativity, not only saw, but heard. They heard the voices of those blessed spirits who praise God day and night, and whom we, in our lower state of being, are allowed to copy and assist.

*We continue with our Novena Prayer for an Irish Ordinariate, Day 2 of our Novena to Bl. John Henry, prayer on sidebar.