'A Year of Faith in Action' announced for the Diocese of Portsmouth, UK 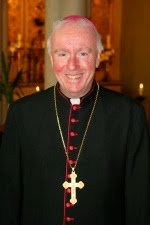 The Year of Faith ended with the Feast of Christ the King on . In the Diocese of Portsmouth, we concluded this grace-filled Year by consecrating ourselves, both as individuals and as communities, in our parishes and our schools, to the Sacred Heart of Christ and by placing ourselves once again under the patronage of Mary Immaculate and St. Edmund. People, however, have been asking whether there might be some kind of follow-up to the Year of Faith.

In the Letter of St. James we read this:

“What good is it, my brothers and sisters, if you say you have faith but do not have works? Can faith save you? If a brother or sister is naked and lacks daily food, and one of you says to them, ‘Go in peace; keep warm and eat your fill’, and yet you do not supply their bodily needs, what is the good of that? So faith by itself, if it has no works, is dead. … For just as  the body without the spirit is dead, so faith without works is also dead” (James -17, 26).

In the light of what St. James says, I wish to announce a ‘Year of Faith in Action.’

This Year of Faith in Action will run throughout the 2014 liturgical year and conclude on the Feast of Christ the King, . I envisage the Year of Faith in Action to be determined by individuals, by parishes and pastoral areas, and by the teams that make up our new diocesan Framework for Collaboration. It will be a year of action, a year of good works, a year of putting faith into practice through deeds of justice and charity in the local community. I will explore this further in the New Year in a Pastoral Letter to be issued on , the Feast of the Baptism of the Lord.

Above from and continued here: Diocese of Portsmouth Address of Bishop Philip Egan