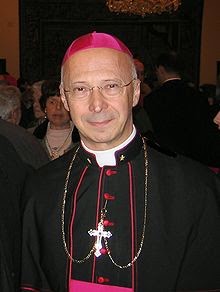 Please pray for Cardinal Angelo Bagnasco, who is President of the Italian Bishops Conference.  Cardinal Bagnasco is also in charge of the Diocese of Genoa which has been affected this past week by serious flooding after sudden and torrential rains.

But also after the Synod on the Family and the disastrous mid term 'Relatio' document from last Monday, the Bishops responded to the final document which was released yesterday and below is the summary of the second Italian working group headed by Cardinal Bagnasco (President of the Italian Bishops Conference).


From the second Italian group moderated by Cardinal Angelo Bagnasco

The final text must necessarily show that it is a continuation of the Teaching Magisterium in this regard.  The pastoral character of this Synod, on the other hand, must show even more that there is no break between the doctrine and pastoral, but this (pastoral) is based on the first (doctrine) and it expresses the truth in the daily life of the christian community

It seems that there is some fear in expressing a judgement on different topics which have become by this time dominant cultural expressions.   This does not appear to be coherent with the prophetic mission which the Church possesses.  It is important that the text expresses at best the prophetic role which the Pastors and the Christian community possess knowing well that we are not in search of an easy populism … but that we have the responsibility to express also a judgement which comes from the Word of God.

The words addressed to the prophet Ezechiel:”When you hear from my mouth a word, you have to inform them in my name…(Ez 3, 17-19).    This becomes evident above all in front of situations which are surmised as a form of de-instituting marriage and the family in force of asserted alleged rights.

Above text (in italics) from: The Splendour of the Church

Other articles of interest on issues relating to Cardinal Bagnasco below;