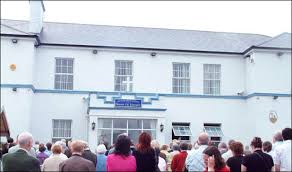 The Archbishop of Tuam, Dr. Michael Neary gave the following statement in 2008 which can be found here on the website linked here.
Tuam Archdiocese - Achill House of Prayer

and from the Diocese of Austin, Texas, Bishop Aymund made the following statement;


Our Lady Queen of Peace House of Prayer, scheduled to open on June 23 at in Leander, is doing so without the approval of Bishop Aymond. It should NOT be considered as sanctioned by the Catholic Church. Chancery officials have received several inquiries about its legitimacy and others have expressed concern regarding the situation.

The house of prayer is associated with Ms. Christina Gallagher of the Tuam Archdiocese in . The Tuam Archdiocese does not recommend her or the House of Prayer as credible. We have also been informed that Father Gerald McGinnity, a priest of the Armaugh Archdiocese in Ireland, will accompany Ms. Gallagher to Austin. Father McGinnity has not been given permission to celebrate Mass at the House of Prayer and will not have faculties from the Austin Diocese to serve in any ministerial capacity.

above from: Diocese of Austin - House of Prayer

On Disobedience to the Church the Saints say the following:

In the Diary of St Faustina Kowalska we read:
"...Jesus says; 'Obedience. I have come to do My Father’s will. I obeyed my Parents, I obeyed My tormentors and now I obey the Priests' ...I understood that our efforts, no matter how great, are not pleasing to God if they do not bear the seal of obedience.... I understand, O Jesus, the spirit of obedience and in what it consists. It includes not only external actions, but also one’s reason, will and judgment. In obeying our superiors, we obey God.." -Diary of Saint Faustina Kowalska
And elsewhere in her diary she writes: "Satan can even clothe himself in a cloak of humility, but he does not know how to wear the cloak of obedience." (Diary, par. 939).

With St. Margaret Mary Alacoque of the Sacred Heart devotion;
On one occasion, the Sacred Heart of Jesus made a request to St Margaret Mary Alocoque, but when she told her this request, her did not approve. Soon afterwards, when Jesus came to her again, she asked Him about this, and He replied: "…not only do I desire that you should do what your Superior commands, but also that you should do nothing of all that I request of you without their consent. I love obedience, and without it no one can please Me" [Autobiography of St Margaret Mary]. Elsewhere in her Autobiography, we read that St Margaret Mary was told by Our Lord: "Listen, My daughter, and do not lightly believe and trust every spirit, for Satan is angry and will try to deceive you. So do nothing without the approval of those who guide you. Being thus under the authority of obedience, his efforts against you will be in vain, for he has no power over the obedient"