From Lifesite News reads;  (link below for full article and petition) 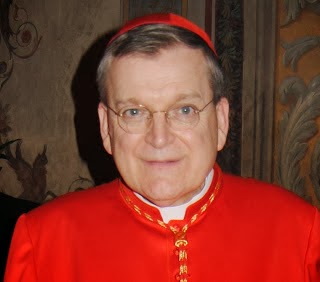 Cardinal Raymond Burke, one of the strongest pro-life and pro-family voices in the Catholic Church, has confirmed that the rumors are true: he will soon be moved from his position as the prefect of the ’s Apostolic Signatura.

For the past 6 years, Cardinal Burke has served in this role, heading up the highest court of the Catholic Church. He is now reportedly to be moved to the largely ceremonial position of patron of the Sovereign Military Order of Malta.

Among Cardinal Burke’s many actions in defense of the truths of life and family has been his courageous stance in support of canon 915, which states that ministers of communion “must” refuse the Eucharist to public and “obstinate” sinners. The cardinal himself has most frequently advocated the use of this canon in the cases of pro-abortion Catholic politicians.

Most recently, he exerted his influence during the Vatican’s Synod on the Family, publicly decrying efforts by some bishops to hijack the synod to push a radical agenda, and steering the Synod towards a more orthodox conclusion.

The transfer of Cardinal Burke from his Vatican post is undoubtedly a loss to the pro-life and pro-family movement, with his role at the Vatican having helped to amplify the cardinal’s prophetic voice.