III. THE EUCHARIST IN THE ECONOMY OF SALVATION

The signs of bread and wine 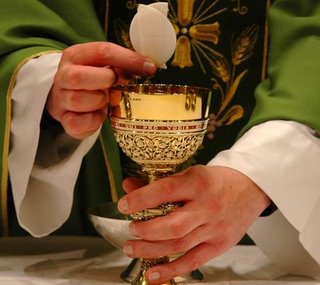 1333 At the heart of the Eucharistic celebration are the bread and wine that, by the words of Christ and the invocation of the Holy Spirit, become Christ's Body and Blood. Faithful to the Lord's command the Church continues to do, in his memory and until his glorious return, what he did on the eve of his Passion: "He took bread. . . ." "He took the cup filled with wine. . . ." The signs of bread and wine become, in a way surpassing understanding, the Body and Blood of Christ; they continue also to signify the goodness of creation.

Thus in the Offertory we give thanks to the Creator for bread and wine,154 fruit of the "work of human hands," but above all as "fruit of the earth" and "of the vine" - gifts of the Creator. The Church sees in the gesture of the king-priest Melchizedek, who "brought out bread and wine," a prefiguring of her own offering.155

1334 In the Old Covenant bread and wine were offered in sacrifice among the first fruits of the earth as a sign of grateful acknowledgment to the Creator. But they also received a new significance in the context of the Exodus: the unleavened bread that Israel eats every year at Passover commemorates the haste of the departure that liberated them from Egypt; the remembrance of the manna in the desert will always recall to Israel that it lives by the bread of the Word of God;156 their daily bread is the fruit of the promised land, the pledge of God's faithfulness to his promises. The "cup of blessing"157 at the end of the Jewish Passover meal adds to the festive joy of wine an eschatological dimension: the messianic expectation of the rebuilding of . When Jesus instituted the Eucharist, he gave a new and definitive meaning to the blessing of the bread and the cup.

1335 The miracles of the multiplication of the loaves, when the Lord says the blessing, breaks and distributes the loaves through his disciples to feed the multitude, prefigure the superabundance of this unique bread of his Eucharist.158 The sign of water turned into wine at Cana already announces the Hour of Jesus' glorification. It makes manifest the fulfillment of the wedding feast in the Father's kingdom, where the faithful will drink the new wine that has become the Blood of Christ.159

1336 The first announcement of the Eucharist divided the disciples, just as the announcement of the Passion scandalized them: "This is a hard saying; who can listen to it?"160 The Eucharist and the Cross are stumbling blocks. It is the same mystery and it never ceases to be an occasion of division. "Will you also go away?":161 the Lord's question echoes through the ages, as a loving invitation to discover that only he has "the words of eternal life"162 and that to receive in faith the gift of his Eucharist is to receive the Lord himself.

Email ThisBlogThis!Share to TwitterShare to FacebookShare to Pinterest
Labels: Catechesis on the Holy Eucharist, Economy of Salvation, Holy Eucharist