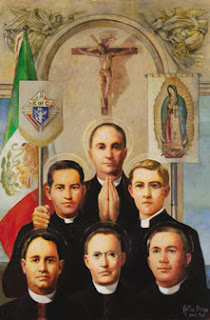 The 1920s brought a revolution to , along with the widespread persecution of Catholics.

Missionaries were expelled from the country, Catholic seminaries and schools were closed, and the Church was forbidden to own property.

Priests and laymen were told to denounce Jesus and their faith in public; if they refused, they faced not just punishment but torture and death.

A painting by renowned Mexican portrait artist Martha Orozco features six priests – members of the Knights of Columbus – who were canonized by Pope John Paul II on .