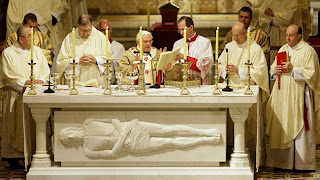 IV. THE LITURGICAL CELEBRATION OF THE EUCHARIST
The Mass of all ages

1345 As early as the second century we have the witness of St. Justin Martyr for the basic lines of the order of the Eucharistic celebration. They have stayed the same until our own day for all the great liturgical families. St. Justin wrote to the pagan emperor Antoninus Pius (138-161) around the year 155, explaining what Christians did:

On the day we call the day of the sun, all who dwell in the city or country gather in the same place.
The memoirs of the apostles and the writings of the prophets are read, as much as time permits.
When the reader has finished, he who presides over those gathered admonishes and challenges them to imitate these beautiful things.

Then we all rise together and offer prayers* for ourselves . . .and for all others, wherever they may be, so that we may be found righteous by our life and actions, and faithful to the commandments, so as to obtain eternal salvation.

When the prayers are concluded we exchange the kiss.

Then someone brings bread and a cup of water and wine mixed together to him who presides over the brethren.

He takes them and offers praise and glory to the Father of the universe, through the name of the Son and of the Holy Spirit and for a considerable time he gives thanks (in Greek: eucharistian) that we have been judged worthy of these gifts.

When he has concluded the prayers and thanksgivings, all present give voice to an acclamation by saying: 'Amen.'

When he who presides has given thanks and the people have responded, those whom we call deacons give to those present the "eucharisted" bread, wine and water and take them to those who are absent.171

- the liturgy of the Eucharist, with the presentation of the bread and wine, the consecratory thanksgiving, and communion.

1347 Is this not the same movement as the Paschal meal of the risen Jesus with his disciples? Walking with them he explained the Scriptures to them; sitting with them at table "he took bread, blessed and broke it, and gave it to them."174

Email ThisBlogThis!Share to TwitterShare to FacebookShare to Pinterest
Labels: Catechesis on the Holy Eucharist, Catechism of the Catholic Church, The Holy Mass