Year of Faith - The Saints - St. Bede the Venerable 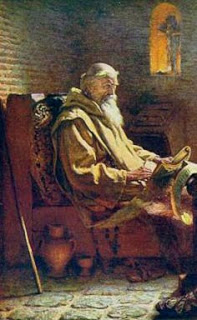 St. Bede was born near St. Peter and  monastery at . He was sent there when he was three and educated by Abbots Benedict Biscop and Ceolfrid. He became a monk at the monastery, was ordained when thirty, and except for a few brief visits elsewhere, spent all of his life in the monastery, devoting himself to the study of Scripture and to teaching and writing.

He is considered one of the most learned men of his time and a major influence on English literature. His writings are a veritable summary of the learning of his time and include commentaries on the Pentateuch and various other books of the Bible, theological and scientific treatises, historical works, and biographies.

His best-known work is HISTORIA ECCLESIASTICA, a history of the and people, which he completed in 731. It is an account of Christianity in up to 729 and is a primary source of early English history. Called "the Venerable" to acknowledge his wisdom and learning, the title was formalized at the Council of Aachen in 853. He was a careful scholar and distinguished stylist, the "father" of English history, the first to date events anno domini (A.D.), and in 1899, was declared the only English doctor of the Church. He died in Wearmouth-Jarrow on May 25.

Above from:  Catholic.org - St. Bede the Venerable