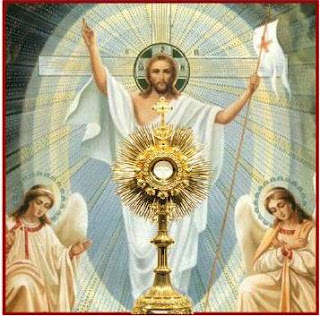 Today, Sunday, June 2, Solemnity of Corpus Christi, Pope Francis will lead a worldwide hour of Eucharistic adoration the has announced.

On that date, cathedrals all across the world will hold an hour of Eucharistic adoration at the same time, inviting the faithful to pray for the Pope's intentions. The worldwide session of adoration will take place from 5 to 6 Sunday afternoon in  and cathedrals worldwide will synchronize their vigils to match that time.


The Pope has asked the universal Church to pray for two intentions during the hour of adoration:

1. For the Church spread throughout the world and united today in the adoration of the Most Holy Eucharist as a sign of unity. May the Lord make her ever more obedient to hearing his Word in order to stand before the world `ever more beautiful, without stain or blemish, but holy and blameless.' That through her faithful announcement, the Word that saves may still resonate as the bearer of mercy and may increase love to give full meaning to pain and suffering, giving back joy and serenity.

2. For those around the world who still suffer slavery and who are victims of war, human trafficking, drug running, and slave labor. For the children and women who are suffering from every type of violence. May their silent scream for help be heard by a vigilant Church so that, gazing upon the crucified Christ, she may not forget the many brothers and sisters who are left at the mercy of violence. Also, for all those who find themselves in economically precarious situations, above all for the unemployed, the elderly, migrants, the homeless, prisoners, and those who experience marginalization. That the Church's prayer and its active nearness give them comfort and assistance in hope and strength and courage in defending human dignity.

The worldwide hour of Eucharistic adoration is one of two initiatives for the Year of Faith, announced on May 28 by the Pontifical Council for the New Evangelization.