Bishops speak out for Freedom of Conscience 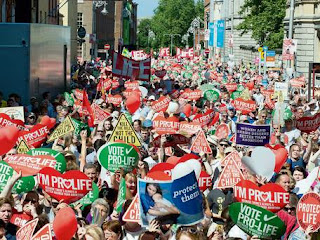 The Bishop of Ferns hit out at the lack of any official political opposition to the bill warning that the 'whipped' support for it has undermined democracy in .


Speaking at the National Shrine in Knock yesterday, Bishop Denis Brennan criticised the lack of a free vote for TDs and said he had "huge admiration" for those TDs, who despite "massive pressure to toe the party line" had "voted and will vote with their conscience."

Meanwhile, the Apostolic Nuncio to , Archbishop Charles Brown, was given prolonged applause by the packed church in as he recalled the words of Blessed John Paul II at in 1979 to remind the people of of the inviolability of human life and the importance of conscience.

In his homily Archbishop Brown referred to the Irish Constitution's "explicit guarantee" of the freedom of conscience to every citizen.

Separately, in Downpatrick, Bishop Noel Treanor of Down and Connor hailed the courage of those TDs who refused to "bend to the weavers of party political mantras".

Above from and full article here:
Irish Independent - Church may back other options to challenge bill – Brady


Bishop Noel Treanor of Down and Connor in his homily yesterday  at Annual Celebration in Saul said the following;

I salute the members of the All-Party Pro-Life Group at Stormont for their letter, published in The Irish Times on Tuesday past, 2 July, in which they signalled their concerns about abortion as a treatment for suicidal ideation and their concern, which is shared, I am sure by many citizens of the Republic of Ireland, of a whipped vote on the ultimate and fundamental value of human life, particularly the life of the defenceless unborn.

As I salute the cross-border initiative of these MLAs , I hail the courage of those TDs and the Minister of State, those men and women, in Dail Eireann, who refuse to bend to weavers of party political mantras, who recognise that the Taoiseach and the government have failed to engage with key and substantive issues raised in reasoned comment from both grounds of pure reason as well as on grounds linking human reason and Christian faith. They are prepared to take a stand, at personal and professional cost, for ultimate values and for policies commensurate with the intellectual refinement and ethical sophistication of which the human imagination is capable in this twenty-first century … and this on a fundamental ethical matter where could give Christian witness and global leadership for the future. Let us keep these and all TDs in our prayers in the coming days and weeks.