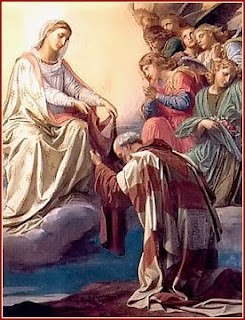 This feast was instituted by the Carmelites between 1376 and 1386 under the title "Commemoratio B. Marif Virg. duplex" to celebrate the victory of their order over its enemies on obtaining the approbation of its name and constitution from Honorius III on (see Colvenerius, "Kal. Mar.", 30 Jan. "Summa Aurea", III, 737). The feast was assigned to 16 July, because on that date in 1251, according to Carmelite traditions, the scapular was given by the Blessed Virgin to St. Simon Stock; it was first approved by Sixtus V in 1587.

After Cardinal Bellarmine had examined the Carmelite traditions in 1609, it was declared the patronal feast of the order, and is now celebrated in the Carmelite calendar as a major double of the first class with a vigil and a privileged octave (like the octave of Epiphany, admitting only a double of the first class) under the title "Commemoratio solemnis B.V.M. de MonteCarmelo". By a privilege given by Clement X in 1672, some Carmelite monasteries keep the feast on the Sunday after 16 July, or on some other Sunday in July. In the seventeenth century the feast was adopted by several dioceses in the south of , although its celebration, outside of Carmelite churches, was prohibited in 1628 by a decree contra abusus.

On , however, it was first granted by Clement X to  and its colonies, in 1675 to , in 1679 to  and its colonies, and in 1725 to the  of the Church, on , it was extended to the entire Latin Church by Benedict XIII. The lessons contain the legend of the scapular; the promise of the Sabbatine privilege was inserted into the lessons by Paul V about 1614. The Greeks of southern  and the Catholic Chaldeans have adopted this feast of the "Vestment of the Blessed Virgin Mary". The object of the feast is the special predilection of Mary for those who profess themselves her servants by wearing her scapular.

Above from: New Advent.org - Catholic Encyclopedia - Our Lady of Mt. Carmel

Email ThisBlogThis!Share to TwitterShare to FacebookShare to Pinterest
Labels: Our Lady of Mt. Carmel