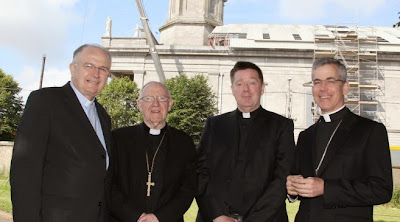 Fr Francis Duffy, a native of Templeport, Co Cavan who recently served as parish priest in Ballinamore has been named the new Bishop of Ardagh & Clonmacnoise.

Francis Duffy was born on in the parish of Templeport, Co Cavan to parents Mary Catherine Dolan and the late Frank Duffy. He is the oldest of four children.

He attended primary school at in Bawnboy and completed his post-primary education at Saint Patrick’s College, Cavan.

Francis studied for the priesthood at Saint Patrick’s College, Maynooth and was ordained a priest for the diocese of Kilmore on in Saint Mogue’s Church, Bawnboy, Co. Cavan by Bishop Francis MacKiernan.

For eleven years Father Francis was on the teaching staff of Saint Patrick’s College, Cavan, where he taught History, Religion and Irish. Father Francis was appointed principal of Fatima and Felim’s Secondary School, Ballinamore, Co Leitrim in 1996.

After twelve years as principal Father Francis was appointed Diocesan Secretary and Chancellor. He had the additional responsibilities of Financial Administrator, Communications Officer and Archivist. Since 2009 Father Francis has been resident priest in the parish of Laragh, Co Cavan where he has remained until the present day.

The Diocese of Ardagh and Clonmacnois consists of nearly all of , the greater part of and parts of Counties Cavan, Offaly, Roscommon, and Westmeath.

Above from and continued here;  Leitrim Observer


'On my ordination card I had a quotation from Gospel, “I have come so that they may have life and have it to the full” (John ). Human life is both sacred and of immeasurable value in all its stages.  I add my voice to that of the Bishops of Ireland, and to other pro-life people, who have clearly affirmed this important message in recent months. Understanding and compassion are key elements in promoting and protecting human life.I know only too well that life has been increasingly difficult for a lot of people and families because of the general economic situation. Voluntary organisations and charities are greatly stretched responding to increased appeals for help. There are many in our society today in need of hope because of pressures.  I know that people, priests, parents, grandparents and friends are giving reassurance, peace of mind and hope. The silver lining in the dark cloud of the destruction of the Cathedral is that new employment has been provided in the local economy.  As part of the Cathedral’s reconstruction, a specialist programme is operating for twenty craftsmen who are working on skill development based on the intricate and ornate interior of Saint Mel’s. We all have a responsibility to help our neighbour when we can'.