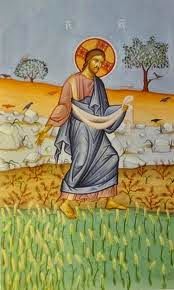 Holy Gospel of Jesus Christ according to Saint Matthew 13:36-43.
Jesus dismissed the crowds and went into the house. His disciples approached him and said, "Explain to us the parable of the weeds in the field."  He said in reply, "He who sows good seed is the Son of Man,
the field is the world, the good seed the children of the kingdom. The weeds are the children of the evil one, and the enemy who sows them is the devil. The harvest is the end of the age, and the harvesters are angels.
Just as weeds are collected and burned (up) with fire, so will it be at the end of the age.
The Son of Man will send his angels, and they will collect out of his kingdom all who cause others to sin and all evildoers.
They will throw them into the fiery furnace, where there will be wailing and grinding of teeth.
Then the righteous will shine like the sun in the kingdom of their Father. Whoever has ears ought to hear.

Christians of the first centuries said, "The world was created for the sake of the Church" (Hermas). God created the world for the sake of communion with his divine life, a communion brought about by the "convocation" of men in Christ, and this "convocation" (ecclesia) is the Church. the Church is the goal of all things, and God permitted such painful upheavals as the angels' fall and man's sin only as occasions and means for displaying all the power of his arm and the whole measure of the love he wanted to give the world: “Just as God's will is creation and is called "the world," so his intention is the salvation of men, and it is called "the Church" (Clement of Alexandria).

It was the Son's task to accomplish the Father's plan of salvation in the fullness of time. Its accomplishment was the reason for his being sent... To fulfill the Father's will, Christ ushered in the Kingdom of heaven on earth. the Church "is the Reign of Christ already present in mystery" (Vatican II, LG 3)... "The Church . . . will receive its perfection only in the glory of heaven,” (LG 48) at the time of Christ's glorious return... Until that day, "the Church... longs for the full coming of the Kingdom... The Church, and through her the world, will not be perfected in glory without great trials. Only then will "all the just from the time of Adam, 'from Abel, the just one, to the last of the elect,' be gathered together in the universal Church in the Father's presence" (LG 2).