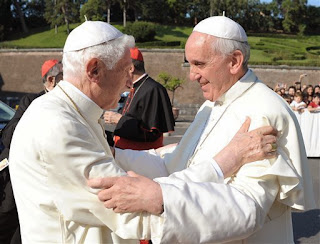 — Pope Francis issued his first encyclical Friday, a meditation on faith that is unique
because it was written with someone else: Benedict XVI.

Benedict's hand is evident throughout much of the first three chapters of "The Light of Faith," with his theological style, concerns and reference points clear.

Francis' priorities come through strongest in the final chapter, where the Argentine Jesuit insists on the role of faith in serving the common good and giving hope to those who suffer. It includes his first clear statement as pope on marriage being a union between man and woman with the aim of creating children.

"This union is born of their love, as a sign and presence of God's own love, and of the acknowledge and acceptance of the goodness of sexual differentiation, whereby spouses can become one flesh and are enabled to give birth to a new life," the encyclical reads.

Francis also cites his namesake, St. Francis of , as well as Mother Teresa, in saying "How many men and women of faith have found mediators of light in those who suffer!" And he concludes with a prayer to Mary, to whom he is particularly devoted.

The encyclical didn't appear to break any new ground in church teaching; its novelty was entirely in the dual authorship, signed and unsigned, and that it was the first of Francis' nascent pontificate.

Francis acknowledged in the introduction that he merely "added a few contributions of my own" to Benedict's "fine" first draft, which the German theologian left unfinished when he retired in February.

Together, the two popes crafted the final installment of Benedict's conceived trio of encyclicals on the three Christian theological virtues: charity, hope and faith.