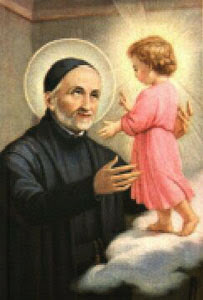 St. Bernardino Realino was born into a noble family of  in 1530. After receiving a thorough and devout Christian education at the hands of his mother, he went on to study medicine at the , but after three years he switched to law and received his doctorate in 1563. Word of his learning, dedication, and legal brilliance spread rapidly, and in 1554 he was summoned to  to assume the
position of auditor and lieutenant general.


Shortly afterward, his exemplary young man came to the realization that he had a religious vocation and, aided by our Lady's appearance to him, joined the Society of Jesus, being ordained in 1567. For three years he labored unstintingly at , devoting himself wholeheartedly to the service of the poor and the youth, and then he was sent to  where he remained for the last forty-two years of his life.
St. Bernardino won widespread recognition as a result of his ceaseless apostolic labors. He was a model confessor, a powerful preacher, a diligent teacher of the Faith to the young, a dedicated shepherd of souls, as well as Rector of the Jesuit college in  and  of the Community there. His charity to the poor and the sick knew no bounds and his kindness brought about the end of vendettas and public scandals that cropped up from time to time.


So greatly was this saint loved and appreciated by his people that in 1616, as he lay on his death bed the city's magistrates formally requested that he should take the city under his protection. Unable to speak, St. Bernardino bowed his head. He died with the names of Jesus and Mary on his lips. His feast day is July 2nd

Above from: Catholic.org - St. Bernardino Realino