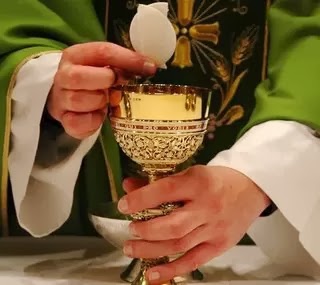 The whole issue about politicians who voted for the abortion legislation and their receiving Holy Communion has risen in the Sunday Independent this morning.  I don't read the paper but just read this particular article online which was brought to my attention via Family & Media text service.  Apparently some Politicians felt they were subjected to a 'ferocious campaign' by Priests and Bishops over this.  One politician was told by a certain Priest not to present himself for Holy Communion.  Well the Priest was right in doing so. Because when Pope Emeritus Benedict XVI was then Cardinal Ratzinger and Prefect of the Congregation for the Doctrine of Faith he did say in a document which was written to the United States Bishops the following;

5. Regarding the grave sin of abortion or euthanasia, when a person’s formal cooperation becomes manifest (understood, in the case of a Catholic politician, as his consistently campaigning and voting for permissive abortion and euthanasia laws), his Pastor should meet with him, instructing him about the Church’s teaching, informing him that he is not to present himself for Holy Communion until he brings to an end the objective situation of sin, and warning him that he will otherwise be denied the Eucharist.

I think we all need basic Catechesis on how to receive Jesus in Holy Communion because it seems to me that the politicians and others are still wondering why one needs to be in a state of grace to do so...I hope someone clarifies all this and soon.  I pray for that.  Because we need to renew our love for the Lord  and treat Him with the greatest respect and reverence in the greatest gift we have been given, His own Presence in the Holy Eucharist.

For full Document by the then Cardinal Ratzinger go here:
EWTN - Worthiness to Receive Holy Communion: General Principles Cardinal Joseph Ratzinger Prefect, Congregation for the Doctrine of the Faith