Over 100,000 attend Vigil for Prayer for Syria with Pope Francis 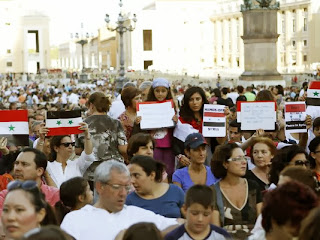 VATICAN CITY (AP) — Tens of thousands of people filled St. Peter's Square for a four-hour Syria peace vigil late Saturday, answering Pope Francis' call for a grassroots cry for peace that was echoed by Christians and non-Christians alike in Syria and in vigils around the world.

The estimated about 100,000 took part in the event, making it one of the largest rallies in the West against proposed U.S.-led military action against the Syrian regime following the Aug. 21 chemical weapons attack near .

Pope Francis spent most of the vigil in silent prayer, but during his speech he issued a heartfelt plea for peace, denouncing those who are "captivated by the idols of dominion and power" and destroy God's creation through war.

Above from and continued here with pictures: Yahoo.com - 100,000 attend Vigil for Peace in Rome

*For me this was a very moving event.  So much Prayer from so many not only in Rome but throughout the world and of all religions and none.  With so many attending it was very disappointing that not a word of this event was shown on the mainstream media news tv channels.  I think that says alot about what they are about and how controlled the media is by certain groups who only want their views given out which may not always reflect the truth of a situation.  The headlines on these controlled mainstream news channels continually speak of Obamas entrenched view on justifying military action and how he is still trying to gather support.

We continue to pray for the people in Syria who are suffering so terribly.  So many now without homes and are walking for days to get to refugee camps in neighbouring  countries.  Where is the effort put in to help the refugees ?  Military action against Syria will compound their suffering and make things worse for so many others.  Let us pray for wisdom and light for all who are making decisions on Syria.