Official Introduction of the Ordinariate Use Mass - The Catholic Herald 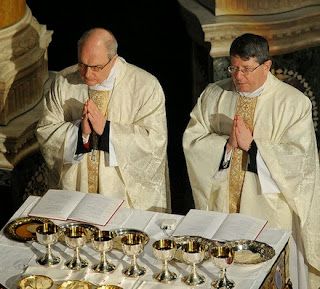 A new text for the Catholic Mass which integrates centuries old Anglican prayers into the Roman Rite was officially introduced in a church on Thursday.

The new liturgy, known as the Ordinariate Use, has been devised for the personal ordinariates – the structures set up by Benedict XVI to allow Anglicans to enter into full communion with the Pope, while preserving elements of their distinctive Anglican liturgical and pastoral traditions.

The Mass, at the of the Assumption and St Gregory, , was celebrated by the leader – or Ordinary – of the Personal Ordinariate of Our Lady of Walsingham, Monsignor Keith Newton. It was offered in honour of the patron of the Ordinariate, Blessed John Henry Newman, whose feast was on October 9.

Above from and full article here at: Catholic Herald

*Here in Ireland we keep Fr.O in our Prayers and continue to pray for an Irish Ordinariate.