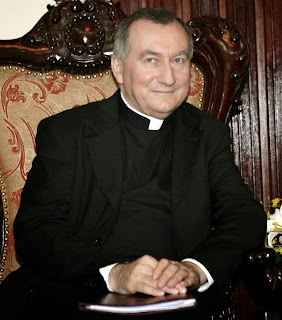 Pope Francis has appointed Archbishop Pietro Parolin as his Secretary of State.

Archbishop Parolin has served as Apostolic Nuncio to since 2009.

In a statement following the announcement today, Archbishop Parolin said: “At this moment, in which my appointment as Secretary of State is made public I desire to express deep and affectionate gratitude to the Holy Father, Francis, for the unmerited trust he is showing me, and to make known to him once again my willingness and complete availability to work with him and under his guidance for the greater glory of God, the good of the Holy Church, and the progress and peace of humanity, that humanity might find reasons to live and to hope.”

From Wikipedia below a small section on his biography: Wikipedia - Pietro Parolin

Parolin was born in Schiavon, , as the son of a hardware store manager and an elementary school teacher. He has one sister and a brother. At the age of ten his father died in a car accident. After he was ordained on , he took up graduate studies in canon law at the  and at the same time diplomacy at the . He entered the Holy See's diplomatic service in 1986 at the age of 31, and has served the Holy See as a diplomat for 20 years, in the nunciatures of  and .

He served for three years in the Nunciature of Nigeria and another three (1989-1992) in the Nunciature of Mexico. In he became familiar with the problems in Christian-Muslim relations. During his time in he contributed to the final phase of the extensive work begun by Archbishop Girolamo Prigione which led to the legal recognition of the Catholic Church in 1992 and the establishment of diplomatic relations between the Holy See and . These laborious negotiations led to officially shedding the country’s secular and anti-clerical imprint, which extended to its Constitution.

In he was as country director for , , , . He speaks Italian, English, French, and Spanish.

Archbishop Parolin will take up his office on the 15th October.  He is expected to be elevated to the cardinalate at the next consistory, due to the seniority the position of Secretary of State normally entails.